KALBITOR (ecallantide) is an under the skin (subcutaneous), on-demand treatment for hereditary angioedema (HAE) attacks that targets and inhibits plasma kallikrein, which stops the production of bradykinin to reduce the pain and swelling of an HAE attack.

KALBITOR is approved to treat hereditary angioedema (HAE) attacks in people 12 years of age and older. KALBITOR is not a cure for HAE.

KALBITOR is an on-demand treatment that targets plasma kallikrein.

People with HAE have a protein in their body called plasma kallikrein that is not controlled properly. KALBITOR inhibits the activity of this protein, which stops the production of bradykinin, to reduce the pain and swelling of an HAE attack.

During an HAE Attack: 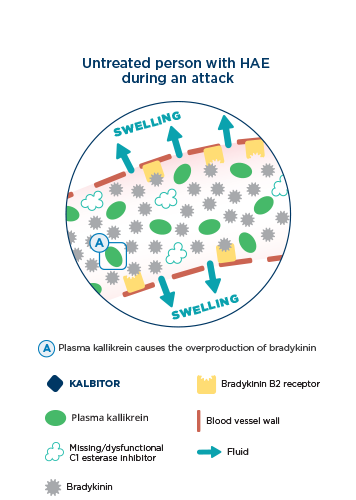 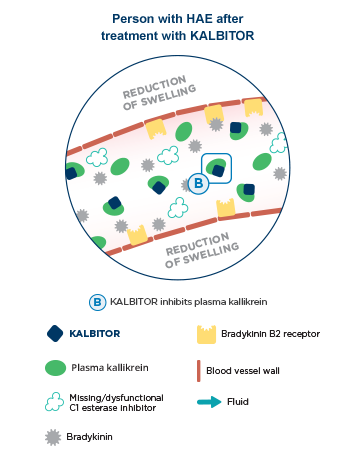 People treated with KALBITOR showed significant improvement in HAE attack symptoms at 4 hours compared to patients who were treated with placebo.

KALBITOR injections should only be given by a doctor or a nurse with appropriate medical support to manage serious allergic reactions and HAE. For each dose, your doctor or nurse will inject KALBITOR just under your skin, away from the site of the attack and into the abdomen, thigh, or upper arm.

Serious allergic reactions have been known to occur in people treated with KALBITOR. These reactions can be life-threatening and usually happen within 1 hour after receiving KALBITOR. See potential side effects.

Please read the Medication Guide before you start receiving KALBITOR and before each treatment. There may be new information.

Please make sure to read Important Safety Information for KALBITOR.

What is the most important information I should know about KALBITOR?
Serious allergic reactions may happen in some people who receive KALBITOR. These allergic reactions can be life-threatening and usually happen within 1 hour after receiving KALBITOR.

What else should I tell my doctor before I receive KALBITOR?
Tell your doctor if you are pregnant, plan to become pregnant, breast-feeding, or plan to breast-feed. It is not known if KALBITOR will harm your unborn baby or pass into your breast milk.

Tell your doctor about all the medicines you take, including prescriptions and over-the-counter medicines, vitamins, and herbal supplements.

What are the possible side effects?
Common side effects of KALBITOR include headache, nausea, diarrhea, fever, injection site reactions, such as redness, rash, swelling, itching, or bruising, and stuffy nose. You are encouraged to report negative side effects of prescription drugs to the FDA. Visit www.fda.gov/medwatch, or call 1-800-FDA-1088.

Talk to your doctor for more information about your medical condition or treatment.

You are about to leave KALBITOR.com.

You are about to leave KALBITOR.com.